The relationship between Bhakti Yoga and Krishna consciousness

Bhakti-yoga belongs to the spiritual tradition of Brahma-Madhva-Gaudiya-Vaisnava philosophy, “disciplic chain”, in Hinduism, a tradition that dates back many thousands of years. The goal of our center is to provide full knowledge about this ancient philosophy, for those interested in self-realization today, which serves as a timeless and pure teaching. The bhakti philosophy and way of life is eternal and transcendental, as it satisfies one’s deepest spiritual needs.

Bhakti-yoga is based on the devotional interpretation of the authoritative Vedanta philosophy, therefore it is one of the main branches of Hinduism. The word bhakti refers to the general devotional feeling, that is present in the heart of any religious person who has spiritual faith. Practices of bhakti-yoga, such as reading Vedic books, mantra meditation, and consuming consecrated food, gradually elevate the followers to the level of self-realization, and pure love of Godhead. The purpose of the process of bhakti is to regain our natural, happy state of consciousness as eternal souls.

In addition, the knowledge of sciences not directly related to bhakti – such as Vedic, and modern sciences and arts – is passed on to those who are interested, based on the Gaudiya-Vaisnava philosophy viewpoint, therefore providing an opportunity for spiritual self-realization and -development through these sciences as well. 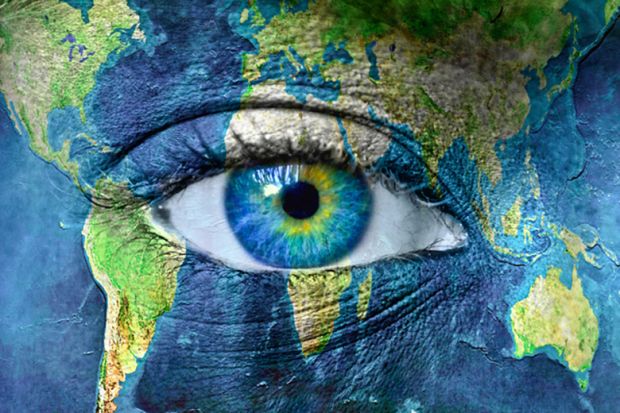 The main teaching: The soul is a spark in the body

You are not this body! The original self of the living entity, the individual soul, is not at all identical with the visible material body. In terms of true self-identity, every living entity is a soul, with transcendental qualities, who is eternal, never born, and does never die. Souls living in the spiritual world are present there in their original, spiritual body, but in the material world, they have taken on a physical body. The soul does not die with the death of the body, but always continues to exist by accepting more and more bodies, until through devotion, through the yoga of love of Godhead (prema-bhakti yoga), one returns to the spiritual world to Kṛṣṇa.

Vedic writings, such as the Bhagavad-gita, and the Srimad-Bhagavatam play a significant role in the spiritual history of India. The teachings of bhakti-yoga are derived from these books, and their followers are called Vaisnavas. The Vedic writings and their Vaisnava explanations have had an extraordinary impact on Indian culture in fields of music, dance, literature, poetry, acting, and the fine arts.

However, in addition to its impact on culture, the bhakti way is primarily serving the spiritual elevation of people, and the social peace. Although the philosophy and practice of bhakti-yoga was only available in India for a long time, it has become known and popular in all parts of the world since the end of the twentieth century.

Vaisnavism in India and beyond

The Vaisnava faith, which promotes bhakti-yoga, was most effectively introduced with the world outside India by A.C. Bhaktivedanta Swami Prabhupada. He founded the International Society of Krishna Consciousness (ISKCON) in 1966.

Gaudiya Vaisnavas are followers of Sri Caitanya (1486–1534). Sri Caitanya in his time promoted the joint worship of Radha and Krishna and the practice of kirtan (the common chanting of the names of God). His followers honor him as an incarnation of Krishna, whose coming was also foretold in the scriptures, and who appeared to spread the path of bhakti. According to his teachings, the Absolute Truth is ultimately a wonderful spiritual personality, God (Krishna). Experiencing a personal relationship with Him is “the greatest of all secrets,” the highest goal that sages, yogis, and philosophers have been searching for since the beginning of time.

What does the name Kṛṣṇa mean?

Vaiṣṇṣṇava scriptures, such as Srīmad-Bhagāvatam, say that God has several aspects and everyone sees him according to one’s own spiritual level. One form of God is the impersonal energy, the omnipresent, ubiquitous Brahman aspect. It is, in fact, the ubiquitous radiation of Kṛṣṇa’s spiritual body. Another aspect of God is the form of the Supersoul or Paramātmā. In this form of, God is present in the heart of every living entity, and in every atom.

His most complete, original form is His personal, two-armed form (Bhagavān Kṛṣṇa). He is also the source of the Brahman- and the Supersoul-aspects. This personal form of Lord Kṛṣṇa forever carries on His pastimes in the Spiritual World, with His associates, but time to time he descends to teach the principles of devotion to distressed beings, born in the material world, who are suffering from birth, death, old age, and diseases, and call them home to the Spiritual World.

Kṛṣṇa comes in innumerable different forms to teach the living entities to practice religion and spiritual practices. Two prominent forms are the shepherd boy (Gopāla) Kṛṣṇa, who appeared in the village of Vrṇdāvana more than 5,300 years ago, and the other Kṛṣṇa avatar is Lord (Śrī) Caitanya Mahāprabhu, descended in 1486., who spread the most prominent religious method of our time, the chanting of the Haré Kṛṣṇa Mahāmantra. 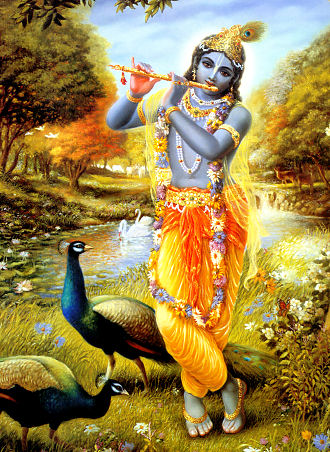 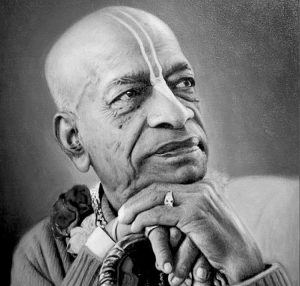 Prabhupada, an elderly saint from India has inspired the younger generations throughout the world to leave their habit of contaminating their consciousness, and become determined spiritual practitioners. Realised the importance of the Bhagavad-Gíta and other spiritual scriptures’s teachings, he made them spread everywhere in the World to bless the suffering population with inner happiness.

Sríla Prabhupada was born in India, Calcutta 1st of September 1896. with the name of Abhay Caran De. His nickname was Nandu, because he was born on the day of Nandotsava a day after Krishna’s birthday. They were a practicing Gaudiya vaisnava (Kṛṣṇa devotee) family.

Prabhupada’s father Gour Mohan De was a successful merchant, and a prominent devote, so he raised his child alike. Gour Mohan was dreaming a vaisnava future for his son: lead him into the vaisnava culture, and then, when the little 6-7 year old Abhay already wanted to practice some of the components of the religious activities, he was supporting and helping him in everything. He often hosted sadhus (saint sages) in their home, and asked them: “bless my son please”.

From the university years to the acceptance of the spiritual master, young Abhay completed his studies at the Scottish Churches’College in Calcutta with excellent results. He also graduated in philosophy, economics and English, although during his university years he was influenced by the independence movement led by Gandhi. The idea of an independent India was so captivating for him at the time, that after completing his studies and passing his exams, he accepted Gandhi’s call, and refused to graduate, thus expressing his protest against English oppression. In 1922, he became acquainted with his spiritual master, Bhaktisiddhanta Sarasvatí Thakur, one of the greatest Vaisnava monks in modern India. Bhaktisiddhanta was a scientist and polyhistor with exceptional abilities. He founded many Gaudiya Vaisnava monasteries, in several parts of the subcontinent. He also spoke in his lectures that the goal of the independence movement was not eternal — that is, not spiritual — and this had a great impact on Abhay. Abhay Caran De later moved from Calcutta to Allahabad, trying to support his family as a pharmacist-salesman, but he increasingly turned towards the spiritual life. In 1932, 11 years after they first met, Bhaktisiddhanta Sarasvati gave Abhay an official spiritual initiation. Over the next four years, he met dozens of times with his spiritual master, who paid special attention to him. During their conversations, he repeatedly expressed his desire to Abhay: he wanted Vasinavism to spread throughout the world, namely through book printing, and book distribution.

You can read more about our founder here: www.founderacharya.com

His Holiness Sivarama Swami is a leading monk in Hungary, a spiritual teacher of the devotional religious process (bhakti-yoga). He is a direct disciple of Srila Prabhupada, and thus an authentic representative of the Gaudiya (Bengali) branch of Vaisnavism. So far, he has written sixteen books detailing the teachings of bhakti. Under his encouragement and supervision, the world-famous Krishna Valley was established in Somogyvámos. It is a self-sustaining ecovillage and community built on the principle of “simple lifestyle and elevated mindset”. You can get to know the work of Sivarama Swami at www.sivaramaswami.hu. 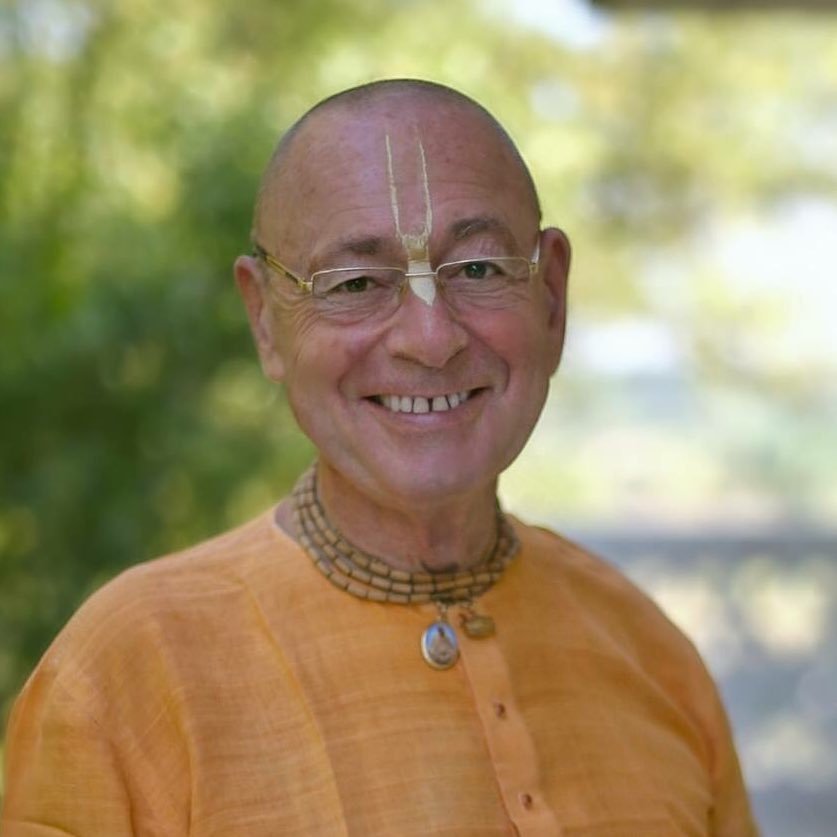 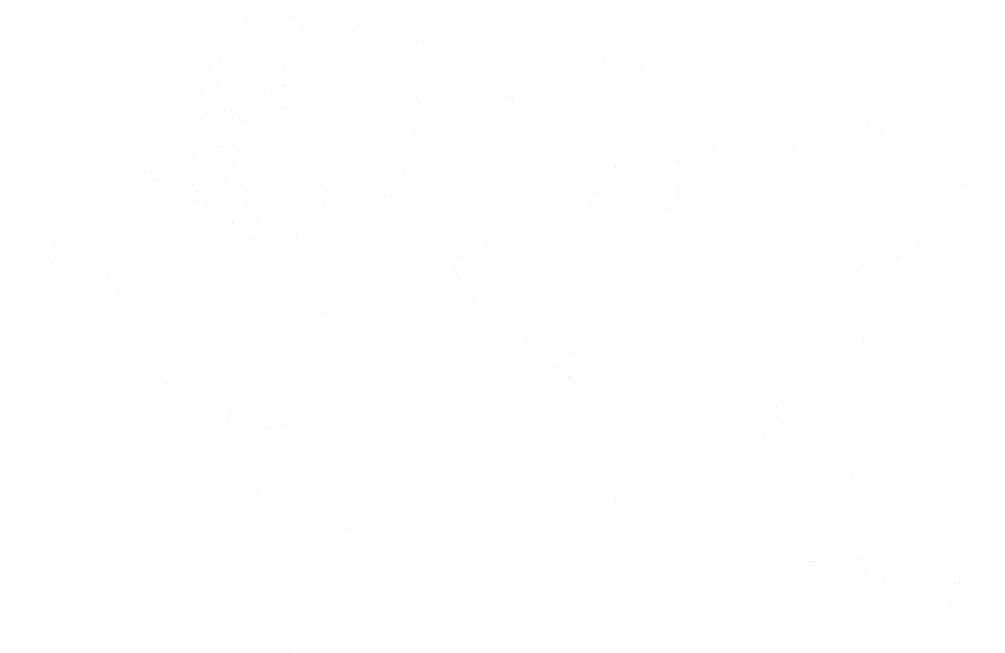 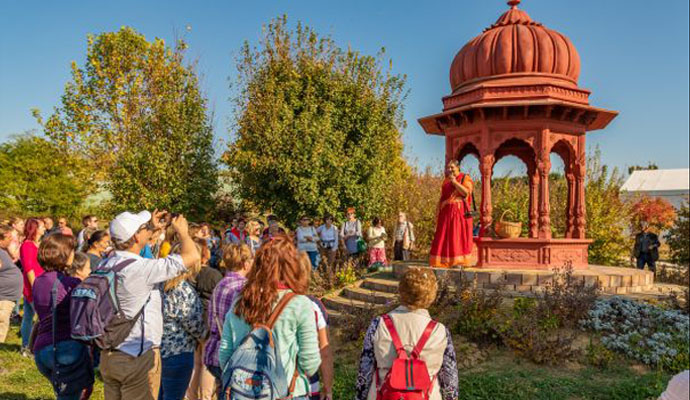 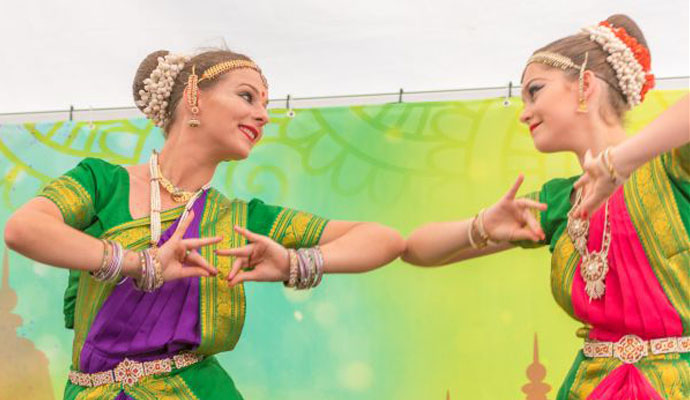 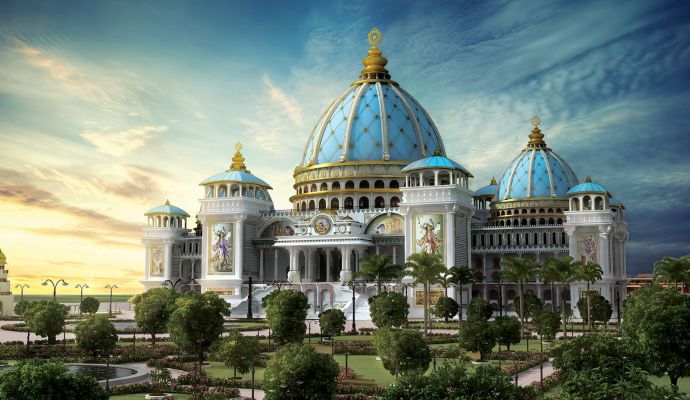 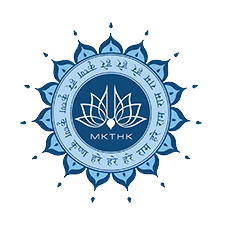 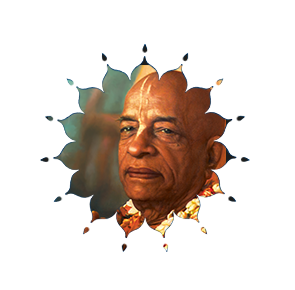 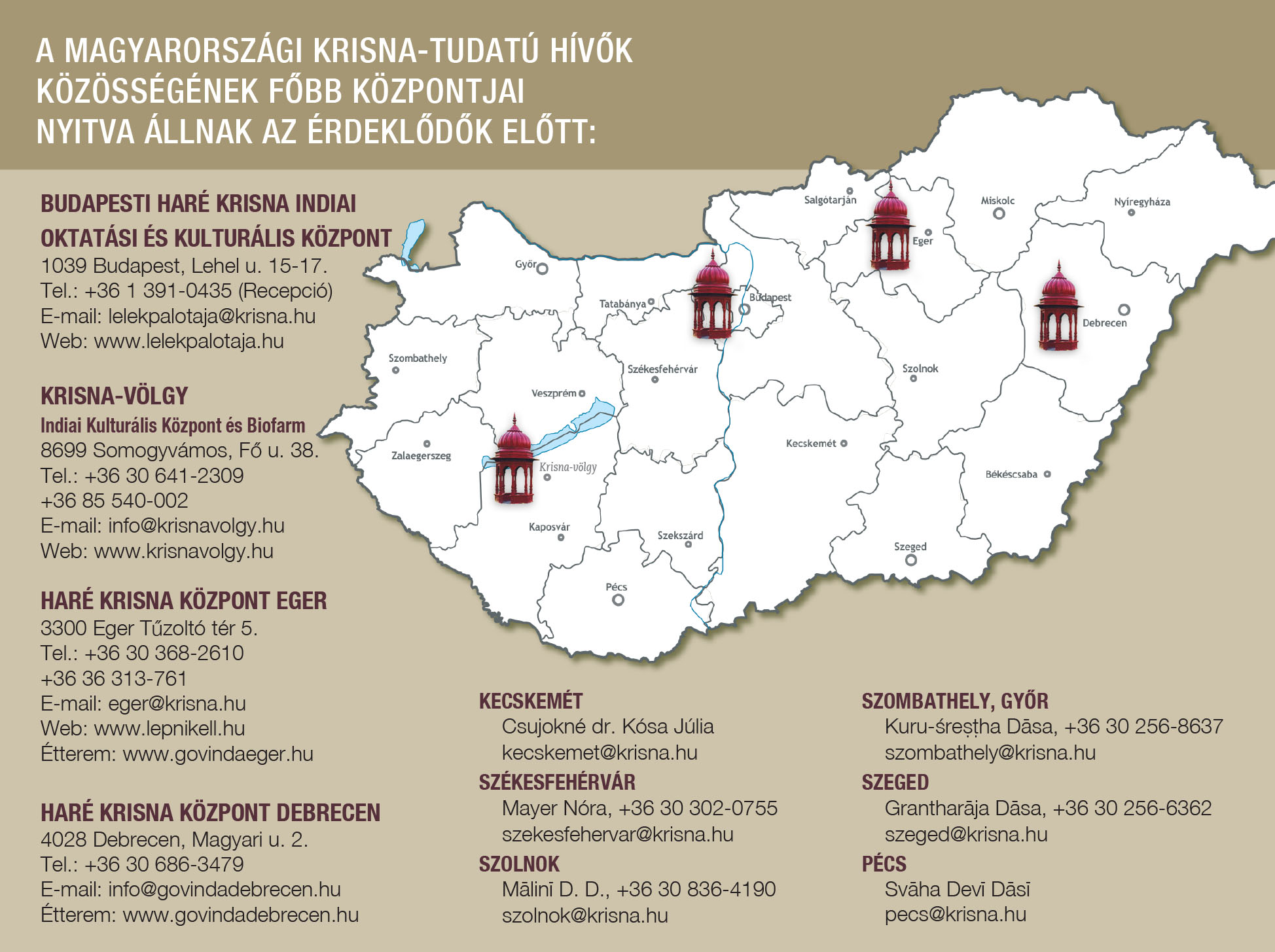